Building “servers” in AWS is a funny play: one credential to access in multiple data centers spreaded across the globe, and few clicks to be able to launch instances… and you’re ready to deploy your application in a kind of Infrastructure as a service way in very few minutes, but with some differences from the classic model of consumption. In fact it’s a bit wrong talking about Virtual Machines in AWS environment for two reasons:

But what will happen to the major part of the companies that are bringing public cloud as a complement for hybrid cloud solution in AWS? For VMware vSphere perspective going in cloud with AWS means buy resources that AWS dedicates for this purpose (actually you could move VM to AWS EC2). But if you want to extend your environment with AWS EC2 services, you should consider another way: extend your network.

The easiest way is establishing a VPN tunnel using VPC service in AWS… but I want to share my altenrative experience with my lab, using pfSense. Yet I don’t know if this could be applied in production environment due to connection performances…

My home-lab is realized with some VMs deployed in a nested ESXi 6.5 that is instantiated on my VMware Workstation Pro 14 installed in my DELL Latitude E5570 (Intel i5 vPro with 16GB RAM). 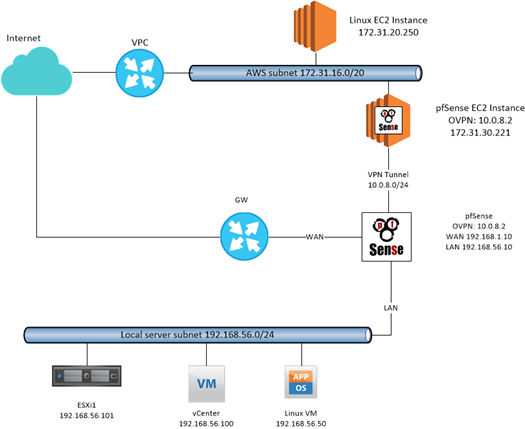 The role of AWS pfSense is build an openvpn tunnel with the on-premise pfSense that share the access to the entire local network, without using a public IP (other than my lab, in a lot of little and non IT companies, you could drive in the same situation).

Then proceed with configuration and update process, connecting via web to the public ip or fqdn assigned to that instance:

Export the configuration to test your connection using openvpn client or similar (depending on your PC) and test a ping or ssh using internal connection.

The final part of the show could be painful even if you don’t copy CA, and other certificates and the key used in server communication. Use the following options in openvpn client configuration:

The last part is configure the routing that could be a classic route instruction in pfsense, but in AWS is important to act with the following steps: 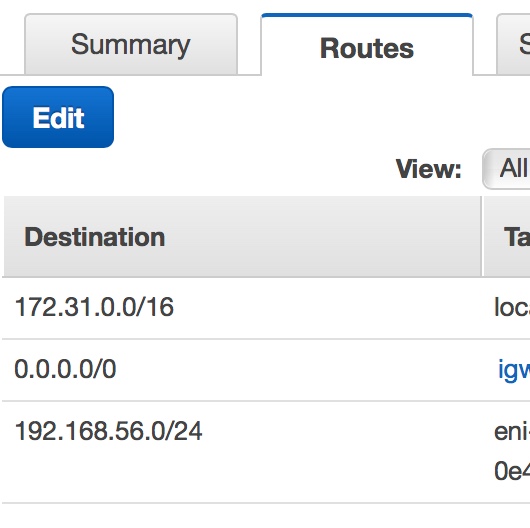 Now my local laboratory is connected to the cloud to realizing a low-cost hybrid cloud.