In the previous study note, we focused mainly on how AWS is organized from the infrastructure side and how you can organize your account(s) with users, groups, roles, and permissions. Now it’s time to dive into the Networking and Security network elements that AWS made available to isolate and connect IaaS infrastructure with managed services.

Amazon Virtual Private Cloud (Amazon VPC) enables you to launch AWS resources into a defined virtual network. This virtual network closely resembles a traditional network that operates in a physical data center, with the benefits of using the scalable infrastructure of AWS.

The following are the key concepts for VPCs:

It is possible to access to create, access and manage a VPC via AWS Console, AWS CLI, AWS SDK, Query API.

Amazon VPC supports the processing, storage, and transmission of credit card data by a merchant or service provider, and has been validated as being compliant with Payment Card Industry (PCI) Data Security Standard (DSS)

There’s no additional charge for using a VPC. There are charges for the following VPC components: Site-to-Site VPN connection, PrivateLink, Traffic Mirroring, and a NAT gateway.

A virtual private cloud (VPC) is a virtual network dedicated to your AWS account. It is logically isolated from other virtual networks in the AWS Cloud.

A subnet is a range of IP addresses in your VPC

To protect the AWS resources in each subnet, it’s possible to use multiple layers of security, including security groups and network access control lists (ACL).

Optionally it’s possible to associate an IPv6 CIDR block with your VPC and assign IPv6 addresses to the instances in the VPC.

If the account was created after 2013-12-04, it comes with a default VPC that has a default subnet in each Availability Zone. A default VPC has the benefits of the advanced features provided by EC2-VPC and is ready for you to use. The others new VPC created are non-default VPC.

When Amazon creates a default VPC, they do the following to set it up:

Note:  IAM policies do not apply to these actions because you do not perform these actions. For example, if you have an IAM policy that denies the ability to call CreateInternetGateway, and then you call CreateDefaultVpc, the internet gateway in the default VPC is still created. 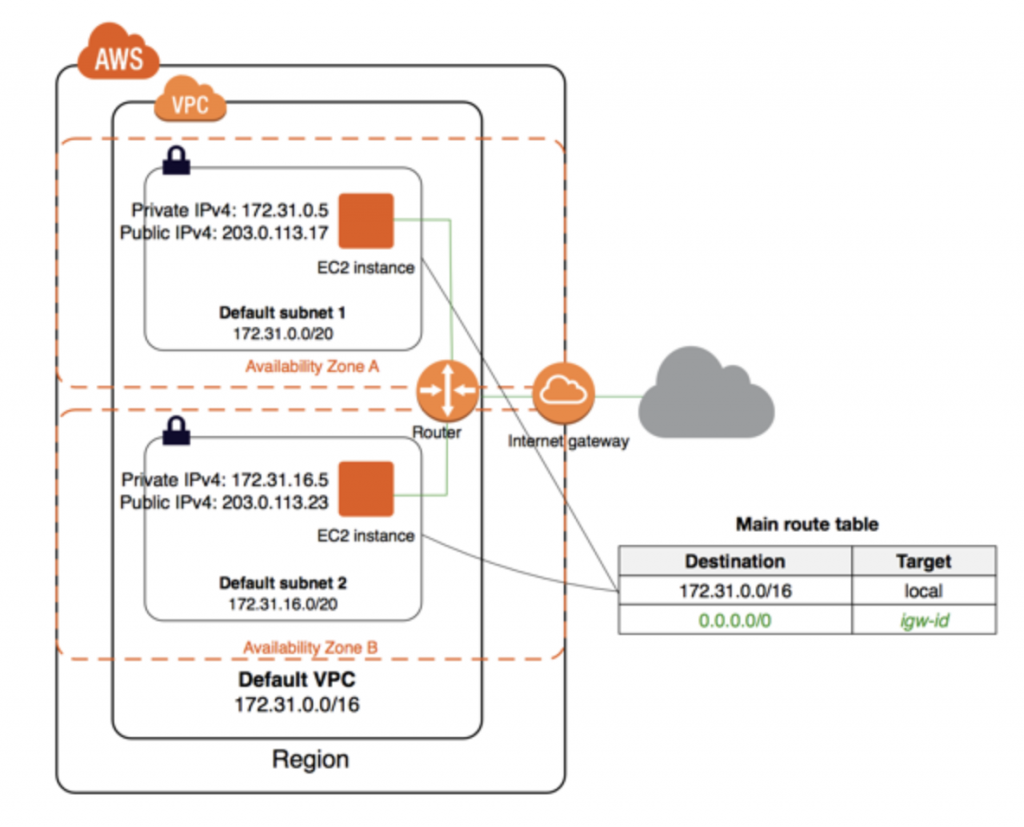 With a default VPC, it’s possible to perform the same actions as any other VPC like

Instances that you launch into a default subnet receive both a public IPv4 address and a private IPv4 address, and both public and private DNS hostnames.

The following are the key concepts for route tables.

Optionally it’s possible to associate a route table with an internet gateway or a virtual private gateway (gateway route table). This enables routing rules specification for inbound traffic that enters the VPC through the gateway.

Each route in a table specifies a destination and a target:

The destination for the route is 0.0.0.0/0, which represents all IPv4 addresses. The target is in this case, the internet gateway that’s attached to the VPC. (Use::/0 for all IPv6 addresses)

You cannot associate a route table with a gateway if any of the following applies:

In addition, the following rules and considerations apply:

We use the most specific route in your route table that matches the traffic to determine how to route the traffic (longest prefix match).

If your route table references a prefix list, the following rules apply: 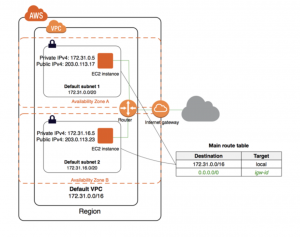 You can enable internet access for an instance launched into a nondefault subnet by attaching an internet gateway to its VPC (if its VPC is not a default VPC) and associating an Elastic IP address with the instance. Alternatively, to allow an instance in your VPC to initiate outbound connections to the internet but prevent unsolicited inbound connections from the internet, you can use a network address translation (NAT) device for IPv4 traffic. NAT maps multiple private IPv4 addresses to a single public IPv4 address.

An internet gateway is a horizontally scaled, redundant, and highly available VPC component that allows communication between your VPC and the internet. For further info check here: https://docs.aws.amazon.com/vpc/latest/userguide/VPC_Internet_Gateway.html

An egress-only internet gateway is a horizontally scaled, redundant, and highly available VPC component that allows outbound communication over IPv6 from instances in your VPC to the internet, and prevents the internet from initiating an IPv6 connection with your instances. For further info check here: https://docs.aws.amazon.com/vpc/latest/userguide/egress-only-internet-gateway.html

You can use a NAT device to enable instances in a private subnet to connect to the internet (for example, for software updates) or other AWS services, but prevent the internet from initiating connections with the instances. For further info check here: https://docs.aws.amazon.com/vpc/latest/userguide/vpc-nat.html 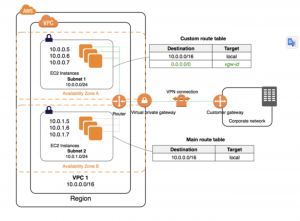 You can optionally connect your VPC to your own corporate data center using an IPsec AWS Site-to-Site VPN connection, making the AWS Cloud an extension of your data center.

A Site-to-Site VPN connection consists of two VPN tunnels between a virtual private gateway or transit gateway on the AWS side, and a customer gateway device located in your data center. A customer gateway device is a physical device or software appliance that you configure on your side of the Site-to-Site VPN connection. For further info: https://docs.aws.amazon.com/vpn/latest/s2svpn/VPC_VPN.html

A transit gateway is a network transit hub that you can use to interconnect your virtual private clouds (VPC) and on-premises networks. Further info here: https://docs.aws.amazon.com/vpc/latest/tgw/what-is-transit-gateway.html 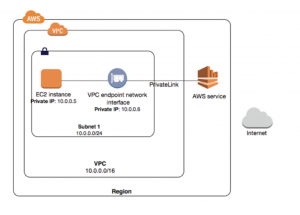 AWS PrivateLink is a highly available, scalable technology that enables you to privately connect your VPC to supported AWS services, services hosted by other AWS accounts (VPC endpoint services), and supported AWS Marketplace partner services. You do not require an internet gateway, NAT device, public IP address, AWS Direct Connect connection, or AWS Site-to-Site VPN connection to communicate with the service. Traffic between your VPC and the service does not leave the Amazon network.

You can create a VPC peering connection between two VPCs that enables you to route traffic between them privately. Instances in either VPC can communicate with each other as if they are within the same network.