The way to use AWS is not limited to AMI provided by Amazon (or 3rd party/community), but is possible to instantiate an EC2 workload starting from your own image, and converting to AMI.

The steps to create your custom AMI starting from VMware runs through these macro steps:

OVA creation and upload in S3

This is the easiest part of this how-to that I don’t want to explain is how to export the Virtual Machine ova from the vInfrastructure or Workstation/Fusion… anyway IMHO the best method to manage VM template is using ova; starting from ovf and vmdk files, you could simply converting these files to ovf using ovftool (https://www.vmware.com/support/developer/ovf/), and executing the following command:

Then, create the role:

Finally we could proceed with the real conversion, uploading the ova file into S3 bucket and creating the “container” description file.

Then execute the command:

The process is asynchronous and to see what is the state of this task, simply issuing the following command using “import-ami-xxxxxx” as task id: 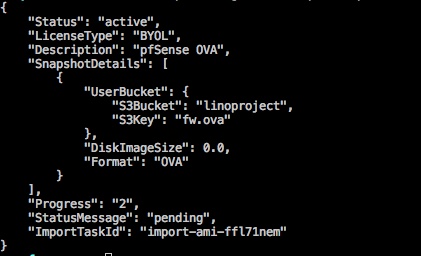 Following the official documentation ( http://docs.aws.amazon.com/vm-import/latest/userguide/vmimport-image-import.html ) the states are:

When the conversion is completed, you could start the first EC2 instance to see if all is gone well.

This guide must be used to convert only Linux or Windows machine running a file system recognized in Amazon EC2 environment (again AWS doesn’t handle Virtual Machines! it handles instances that could be executed in its environment).

Note: this guide is valid is not valid for other filesystems such as FreeBSD or similar.