With Leaf-Spine configurations, all devices are exactly the same number of segments away and contain a predictable and consistent amount of delay or latency for traveling information. This is possible because of the new topology design that has only two layers, the Leaf layer and Spine layer.

The Leaf layer consists of access switches that connect to devices like servers, firewalls, load balancers, and edge routers.

The Spine layer is the backbone of the network, where every Leaf switch is interconnected with each and every Spine switch.

The standard network data center topology was a three-layer architecture:

The design of this model provides a predictable foundation for a data center network:

The 3 Tiered topology ( composed by Core-Aggregation-Access) could be inefficient in a datacenter context: problem with bottleneck occurred by Eest-West traffic, non-linear scaling in terms of performance and costs and not completing consumption of the available network resources, has been favored the adoption of the leaf-spine network topology.

Talking more about East-West traffic, network segments are spread across multiple switches requiring hosts to travers networks interconnection. The huge growth of this traffic is given by  the adoption of converged (or hyperconverged) systems and the virtualization, that simply increase the host density per host and rack and requires more and more bandwidth performing management activities (like DRS, backup) or simply increase performance for software defined storage systems that are “walking” with virtualized systems (like storage virtualization like vSAN)

A leaf-spine design scales horizontally through the addition of spine switches, which spanning-tree deployments with a traditional three-layer design cannot do. This is similar to the traditional three-layer design, just with more switches in the spine layer. In a leaf-spine topology, all links are used to forward traffic, often using modern spanning-tree protocol replacements such as Transparent Interconnection of Lots of Links (TRILL) or Shortest Path Bridging (SPB). TRILL and SPB provide forwarding across all available links, while still maintaining a loop-free network topology, similar to routed networks.

Differentiate virtual network topologies and Given a specific physical topology, determine what challenges could be addressed by a VMware NSX implementation.

A typical multi-tier application architecture is composed by database tier, application tier and presentation/web tier. All tier must be protected against networks attacks and could be assisted by load-balancer and/or VPN as well. Every network segments which provide network connection between VMs in the same tier must be “isolated”. 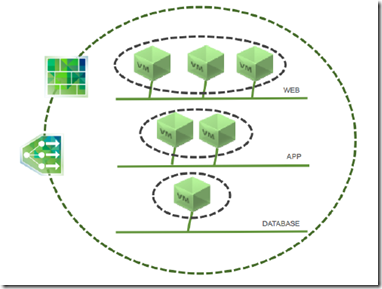 The logical switching capability in the NSX platform provides the ability to spin up isolated logical L2 networks with the same flexibility and agility that exists virtual machines.

Endpoints, both virtual and physical, can connect to logical segments and establish connectivity independently from their physical location in the data center network. 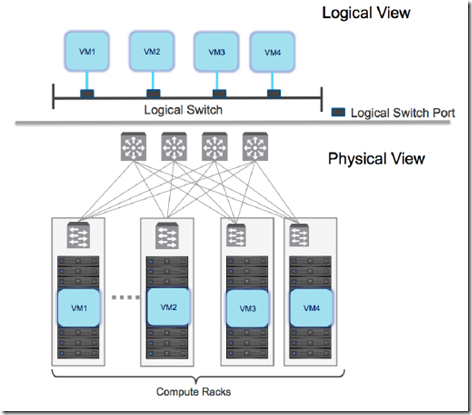 The logical routing capability in the NSX platform provides the ability to interconnect both virtual and physical endpoints deployed in different logical L2 networks. 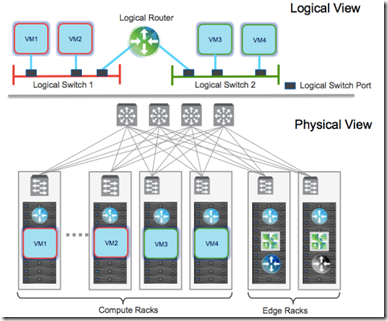 The deployment of logical routing can serve two purposes: 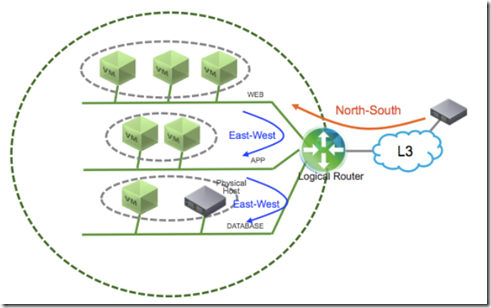 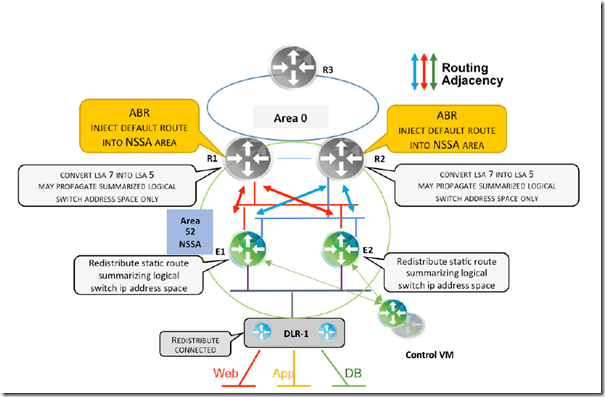 The gray routers R1 and R2 can represent either L3-capable ToR/EoR switches that serve as ABRs and are connected to the datacenter backbone OSPF area 0, or L3-capable switches positioned at the aggregation layer of a traditional pod-based datacenter network architecture that serve as the L2/L3  demarcation point. ESG1, ESG2 and DLR-1 are in the same NSSA area 52.

BGP is becoming a preferred protocol in modern data center spine-leaf topology. The concept of BGP as protocol to interconnect autonomous system applies well when considering NSX as separate autonomous routing zone with its own internal routing supporting east-west forwarding. It’s highly recommended for ESG and DLR in these situations:

Keep in mind when planning the ASN (numbering schema):

For the multi-tenant design with BGP, a summary route for the NSX tenant’s logical networks is advertised from the ESGs to the physical routers through an EBGP session. 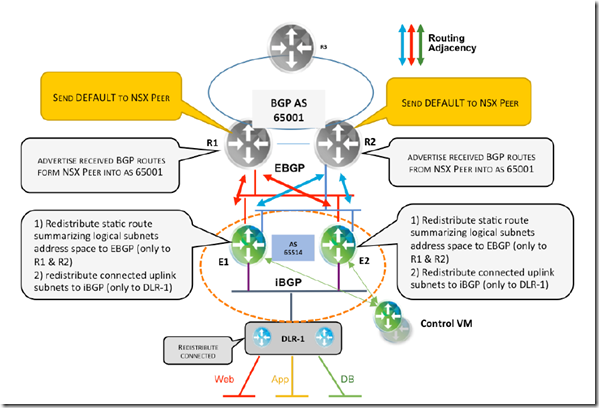 Virtualized environments must carry various types of traffic, Each traffic type has different characteristics and applies different demands on the physical switching infrastructure. The cloud operator might be offering various levels of service for tenants. Different tenants’ traffic carries different quality of service (QoS) values across the fabric. No reclassification is necessary at the server-facing port of a leaf switch. If there were a congestion point in the physical switching infrastructure, the QoS values would be evaluated to determine how traffic should be sequenced – and potentially dropped – or prioritized.

Two types of QoS configuration supported in the physical switching:

NSX allows for trusting the DSCP marking originally applied by a virtual machine or explicitly modifying and setting the DSCP value at the logical switch level –>  the DSCP value is then propagated to the outer IP header of VXLAN encapsulated frames.

For virtualized environments, the hypervisor presents a trusted boundary, setting the respective QoS values for the different traffic types.

The vSphere Virtual Distributed Switch (VDS) is a foundational component in creating VXLAN logical segments. The span of VXLAN logical switches is governed by the definition of a Transport Zone –> each logical switch can span across separate VDS instances over the entire transport zone.

Advantages in keeping separate VDS for compute and edge:

The general design criteria used for connecting ESXi hosts to the ToR switches for each type of rack takes into consideration: 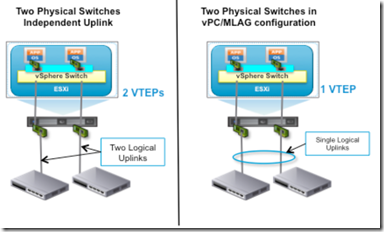 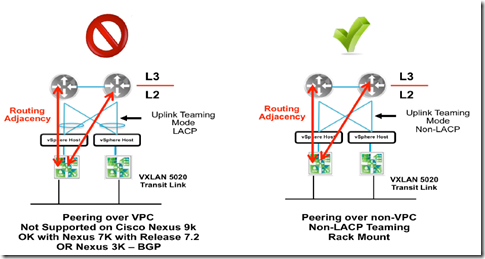 When deploying a routed data center fabric, each VLAN terminates at the leaf switch (i.e., Top-of-Rack device), so the leaf switch will provide an L3 interface for each VLAN. Such interfaces are also known as SVIs or RVIs.

VXLAN Traffic: After the vSphere hosts have been prepared for network virtualization using VXLAN, a new traffic type is enabled on the hosts. Virtual machines connected to one of the VXLAN-based logical L2 networks use this traffic type to communicate. The VXLAN Tunnel Endpoint (VTEP) IP address associated with a VMkernel interface is used to transport the frame across the fabric.

Management Traffic: is sourced and terminated by the management VMkernel interface on the host. It includes the communication between vCenter Server and hosts as well as communication with other management tools such as NSX manager.

Storage traffic: is used to provide features such as shared or non-directly attached storage (NAS, iSCSI). This subnet cannot span beyond this leaf switch, therefore the storage VMkernel interface IP of a host in a different rack is in a different subnet.

Host Profiles for vmk ip addressing:  After this host has been identified and basic configured has been performed, a host profile can be created from that host and applied across the other hosts in the deployment. The following are among the configurations required per host: 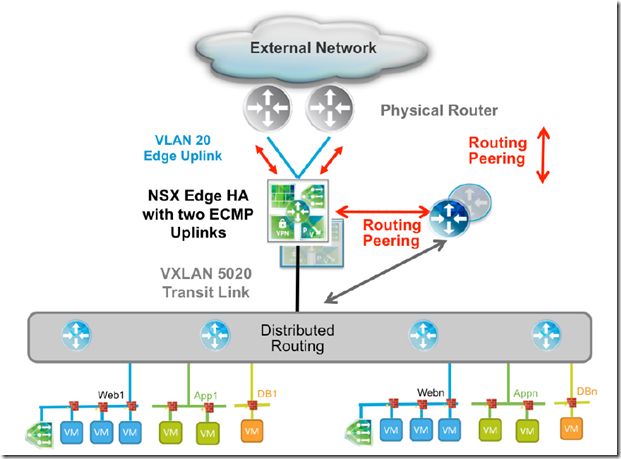 The aggressive setting of routing protocol timers as applied to ECMP mode for faster recovery has an important implication when dealing with the specific failure scenario of the active control VM –> This failure would now cause ECMP Edges to bring down the routing adjacencies previously established with the control VM in less than 3 seconds. To mitigate this failure of traffic, static route with a higher administrative distance than the dynamic routing protocol used between ESG and DLR are needed. 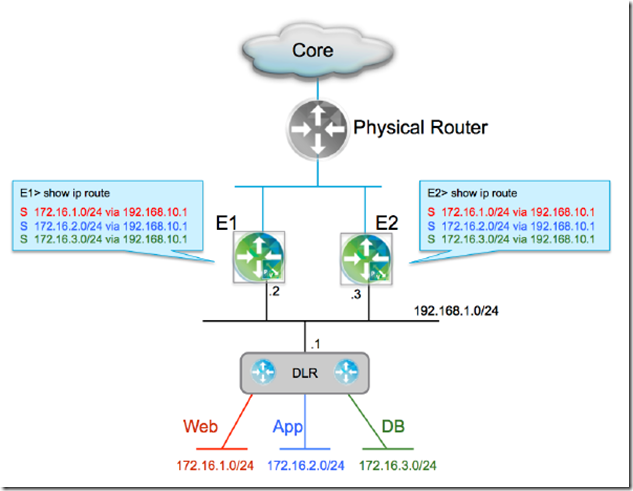 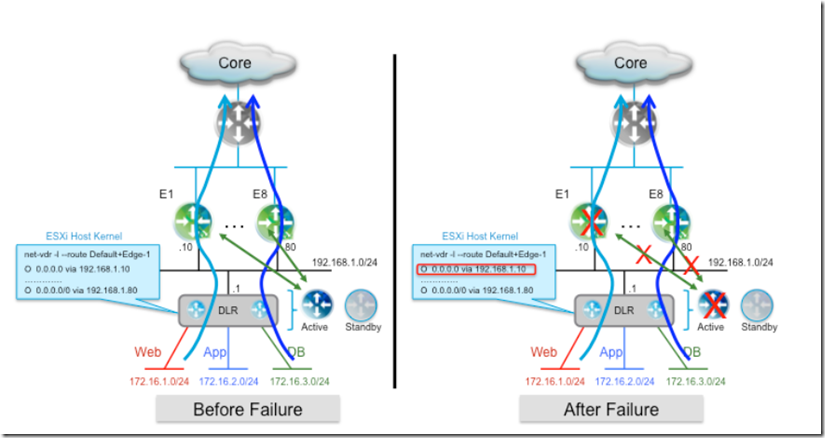 In this failure event, the control VM cannot detect the failure of the Edge since it has also failed and the standby control VM is still being activated. As a consequence, the routing information in the ESXi host’s kernel still shows a valid path for south-to-north communication via the failed Edge device.This state will exist until the standby control VM is activated, it restarts its routing services, and reestablishes adjacencies with the Edges. This will lead to a long outage for all the traffic flows that are sent via the failed Edge unit.

In order to address this outage: 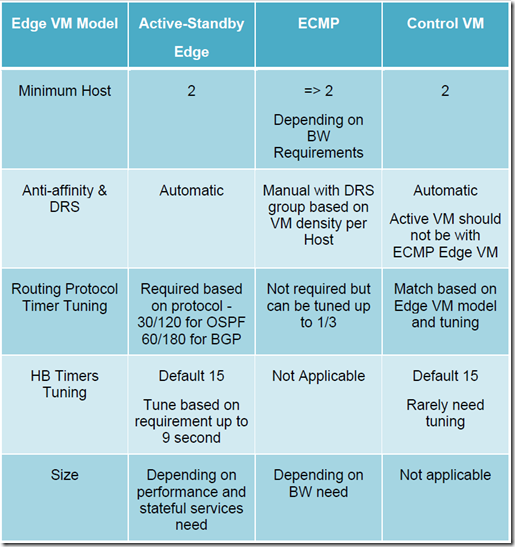