Don’t ask to your Network Administrator: could you handle all my VLAN and security starting from applications? He never say yes! But there are some easy ways that could be taken to gain flexibility deploying and operating network connections between VMs and the external world:

The last is what every virtualization administrators are looking for but the major part of networking admin are not safe to approve! And this is why I’m writing this post.

All starts from application… but ends soon with Network administrator

One of the most important element that every system administrator must consider during infrastructure design is the application perspective: the only contact point with the development staff! Depending on the experiences of your dev engineer, you should be able to get some important application characteristics  like:

But there is a forever missed argument on your interview that often cause a security problem:

They always say: networks and security are up to you and the network team! Before NSX this was the exasperation of the project interviews, and you, the poor infrastructure administrator, are acting as “the man in middle” to try to fit what was missing with the environment you are working on! 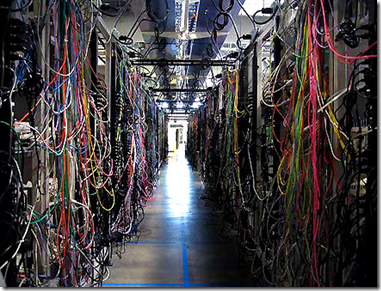 Giving a security perspective, the top from application perspective is:

There are some challenges near some worries that must be covered using the technology and this is the case where software defined paradigm aid to build a flexible and secure virtual datacenter. 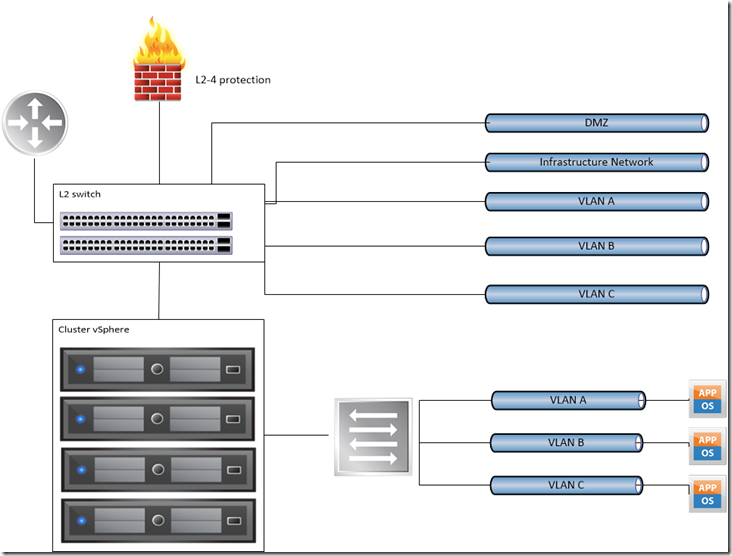 Firewall/router and L3 switch on top of the scheme represent the single point of failure of the entire network (for some manager is the way to spend a lot of budget!). Talking about connection flows: cps (connections per second) and throughput are the two main critical factors to consider to avoid networking congestions. For every connection starting for VM and ending to another VM, quite all physical network devices are involved in linking and controlling every packet, even if the traffic doesn’t go outside the vDC. There is a “waste” of resources!

From more and more literature about NSX there is a scheme that shows every component from management plane to data plane. Let’s take a look here: https://communities.vmware.com/docs/DOC-30645 There are 3 key elements that are involved in data flow optimization:

VXLAN could be defined as a L2 in a L3 connection, build to virtualize network traffic inside physical or logical connection (https://tools.ietf.org/html/rfc7348). During NSX host preparation one vib enables virtual switches through a vmkKernel interface to use this “service” and start deploying logical connection starting from index 5000 (it’s a convention used to separate VXLAN index from VLAN: a value greater than  4096). The prerequisites are:

Using a transport zone, a global connection between every hosts involved in one or more VXLAN connections, every hosts through vmkernel service, called VTEP, could establish a network connection like happens in physical world. In other words every packet generated by a single VM follows this sequence:

Apparently this could be a complication of the “standard” way to make networking in a virtual environment… but let’s see the benefits: 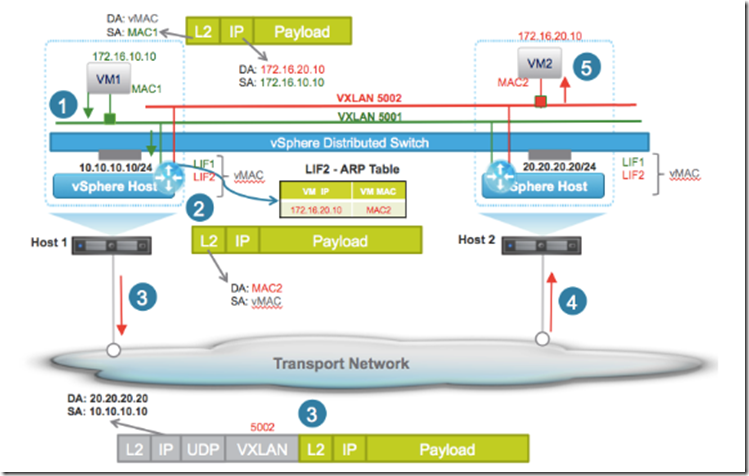 Near ARP table, there is a vSwitch vib called DLR that handles (and shares) a routing table. The new sequence from VM1 to VM2 will be

Do you remember the same situation the In physical world? Single or multiple router, with a single connections per second limit, must be deployed… and large amount of traffic will be flowed across every switches places between hosts and router. In the current case no traffic goes outside the transport network!

Last but not the least is the firewalling check in every segment to protect north-south and east-west traffics. With a similar mechanism of DLR, every packet is checked by Distributed Firewall (L2-L4 stateful), using a Rule Table and a Connection Tracker Table to allow or deny connections before the packet is going out of logical switch.

For every packet sent and/or received by a VM: 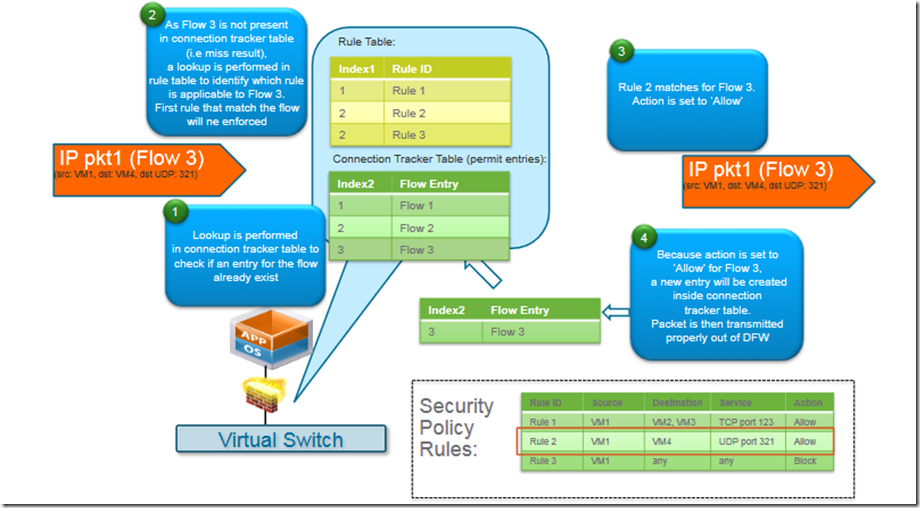 Note that no traffic is generated in every direction in order to analyze and permit/deny the traffic. In old physical deployment this is could not be happened because firewall connection is after switch connection. The result is that every flow generates a lot of connection and the core firewall must be well sized in order to guarantee security and availability.

Physical World connections at the “Edge” and more

VXLAN, DFL and DFW are involved in east-west traffic to realize a resilient and efficient networking cluster. Using NSX EDGE it could be possible to handle traffic and services outside the vDatacenter: the north-south connection. Let’s see an example: 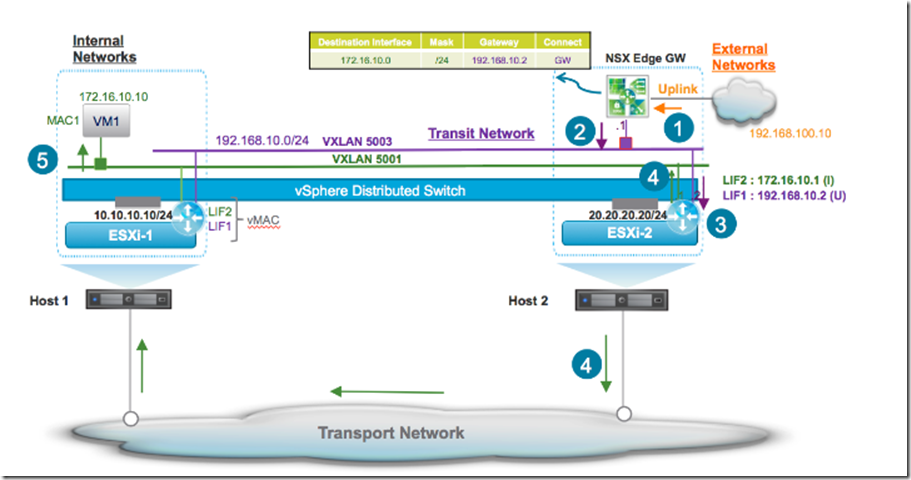 The combination of DLR and VXLAN could be used to realize east-west traffic and the EDGE is used to route packets in a portgroup which is physically connect to a switch. Out of the box EDGE is a virtual Router/Firewall (a VM) that brings many services like firewall rule and routing table but also NAT, load balancing and VPN. Be in a virtual environment gains the advantage to interconnect VM with a “software link” that could be used to make a bridge for the physical world.

Well! The question is: with these elements is it mandatory a physical firewall? I could say NO only if the north traffic is clean… in a other words: only if you are not directly connected to Internet. Watching what is going on about the newest the security attacks, I suggest a L7 protection using:

Thinking all virtual this could be a great solution: 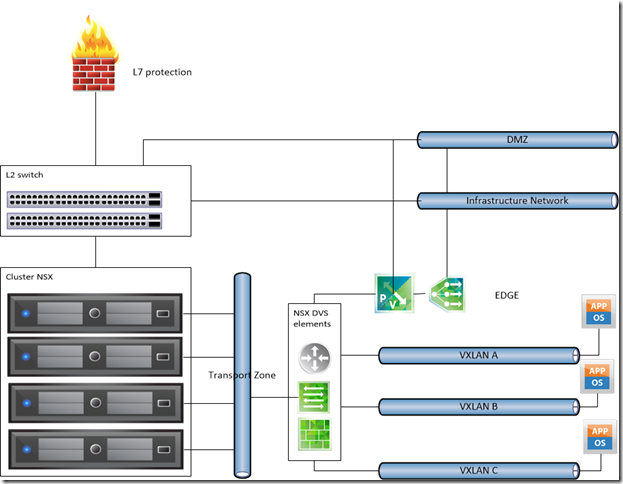 Physically is really simple: a top of the rack switch (min 2 stacked) and a cluster of physical server with only 3 VLAN running across the entire host with a single dVS. Just few notes:

And now you’re the King!

There’s a lot of documentation and integration, with some success cases. For study I really suggest the design guide available here: https://communities.vmware.com/docs/DOC-27683 (the major part of the images are taken from this document)

Near the literature, I suggest to practice with Hands on Lab to preview all these functionalities without wasting time for setting up a test environment:  http://www.vmware.com/go/try-nsx-en

Un pensiero riguardo “Give me an Internet connection and I will rule on datacenter networks!”