My previous lab described here was composed by a SuperMicro E200-8D equipped with an Intel Xeon D-1528, 32GB RAM, and a single 512GB SSD. During my labs, I noticed how the vCenter is able to consume a lot of resources even if deployed in the smallest available configuration. Near this problem, the new need is to have two separated line of delivery: one composed by the physical layer and one composed by nested layer. In this way is possible to deploy every ESXi getting the freedom to create and destroy ESXi hosts with a bit of automation.

Thanks to my friend Pietro Piutti, I recently acquired a new host and a NAS: a fresh resource to deploy an effective management layer composed by vCenter, Primary Domain Controller, Firewall and an NFS Datastore to store ISO and Backups or simple test a traditional host-storage deployment.

Finally, I got a new lab configuration composed by:

A useful tip for USB to Ethernet Adapter with ESXi

Opening the NUC Box I realize that 1 physical Ethernet port couldn’t be enough. But my friend Pietro, knowing my “LAB” intention provided me a USB Ethernet adapter in order to connect NAS or other systems in a separated physical line. But how let ESXi recognize this USB device?

Simply ESXi doesn’t natively show the adapter but surfing the web I find a solution that brings another well-known name in the {code} community: William Lam. Because every the major part of the lab-guys could run into the same issue, in this post he describes how to install the USB Ethernet driver.

… and the result is: 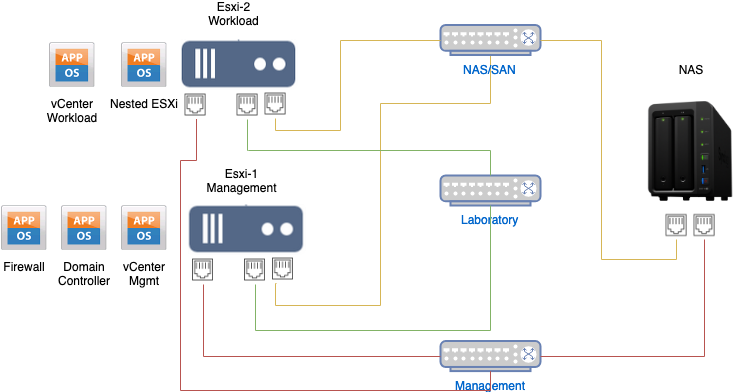 From “virtual perspective”, in the workload host is possible to install nested ESXi hosts which can be handled by the management vCenter or by another vCenter in case of showing upgrade or other disruptive activities.

In the next post, I’ll show how I started “Terraforming” the rest of my lab. Stay tuned.