A new vSphere version is live with some improvements. Near some useful vCenter features and improvements like File-based backup and restores using SMB and NFS protocol and simplified certificate management, a look into integrations with Code Capture and the vSphere Enterprise ROBO are new ingredients of this last release. Let’s see in-depth…

vSphere 6.7u2 is now in GA. As a minor release, there is no major change and the compatibility with previous “block” is guaranteed! As usual, before update vCenter and ESXi(s) is best practice do a complete backup (or check the consistency of the last backup).

vSphere Enterprise ROBO is the Enterprise release of vSphere for Remote-Branch office that has the same features of ROBO advanced plus DRS-MM and VM Encryption. ROBO licenses are indicated for a remote small deployment, and in this case, a feature like DRS-MM could be a great alternative to the standard licensed handling VM migration during host maintenance. It’s important to notice that this feature is not acting like the classical DRS, where the workload is balanced through the hosts but is a simple VM migration that simply evacuates and replace Virtual Machines during planned maintenance.

Another important announcement is the deprecation of the external PSC. In fact, in this release is possible to migrate the eventually external deployment already present in the infrastructure to its relative embedded version. 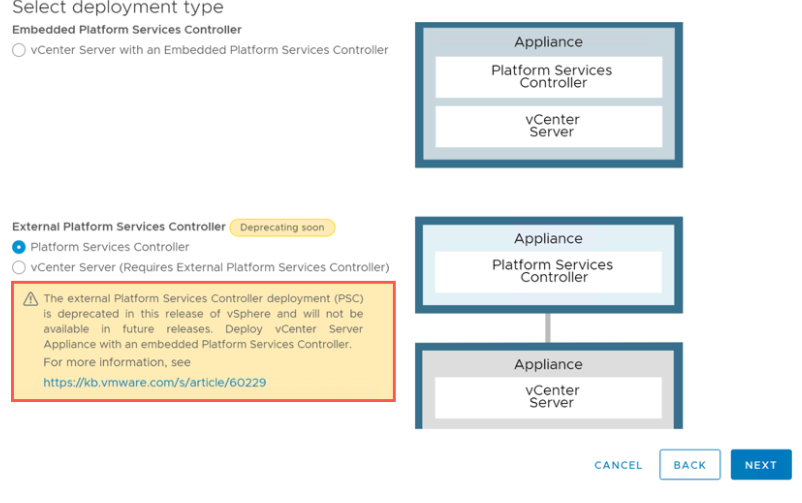 The NFS and SMB supported protocol for File Lever Backup/Restore is another important improvement. Near the FTP, SFTP, HTTP it is possible to choose other ways to protect vCenter Server and PSC against environment failures.

vSphere Health system is the new telemetry system that simply collects infrastructure data and display alarms and notifications based on issues find during the normal operations. BTW the status of the whole infrastructure is now displayed in four categories: Online Availability, Compute, Network, and Storage.

From the vSphere client side, Code Capture and API explorer are now embedded in vSphere. These two important features, which enable automation and infrastructure coding, already available as flings, are now official features that deserve particular attention.

After the guided update finished the process, ( Connect to management interface https://<vcenter>:5480 then the available update will be shown in “Update” tab… check here) a new section appears in vCenter UI: The developer portal.

This section is composed of 3 tabs: Overview, API Explorer and Code Capture.

As described in Kyle’s post the Code Capture is a tool that simply records vCenter actions into a PowerCLI code. Then it’s possible to reuse the code to automate some handy process with few modifications.

Again I want to recommend the post written by Kyle Ruddy that better explains this functionality: https://blogs.vmware.com/PowerCLI/2018/08/introducing-code-capture.html.

This version comes also with other improvements like update manager and plugin manager which are well described in the official What’s new.