All of us know the direct installation via media, which is the most used by many folks during “poor” cluster installation (up to 6 nodes installation). But in this post I would highlight other installation methods, extracting pieces of infos from official docs:

It’s possible to perform scripted way to install and upgrade esxi host. The installation/upgrade script must reside in these location:

Scripted installation could be performed with these options:

The way to perform scripted installation are: 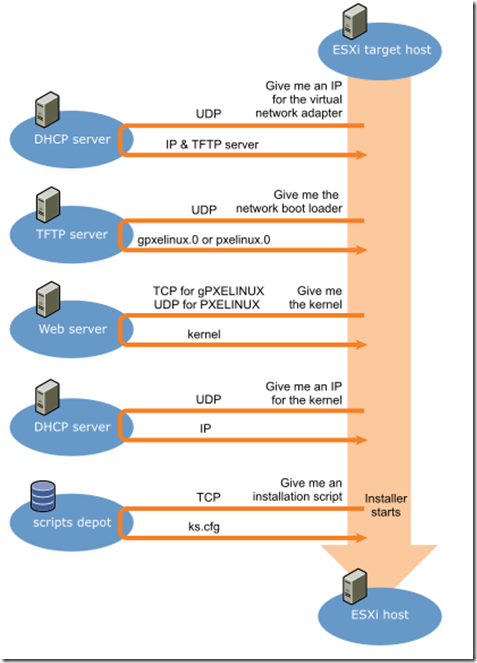 Boot loader confg file is located in boot.cfg., and includes kernel options and modules to use during installation.

Auto deploy method is useful to deploy hundred of ESXi hosts, specifying image to deploy and the host to provision and optionally attach an host profile.

Auto Deploy uses PXE boot infrastructure in conjunction with vSphere host profiles to provision and customize that host. It stores the information for the ESXi hosts to be provisioned in different locations. Following the sotres information:

It’s possible to specify the behavior of the Auto Deploy server by using a set of rules written in PowerCLI. Rules engine maps software and configuration settings to hosts based on the attributes of the host. The rules engine includes rules and rule sets:

There are some prerequisite for the First Boot: 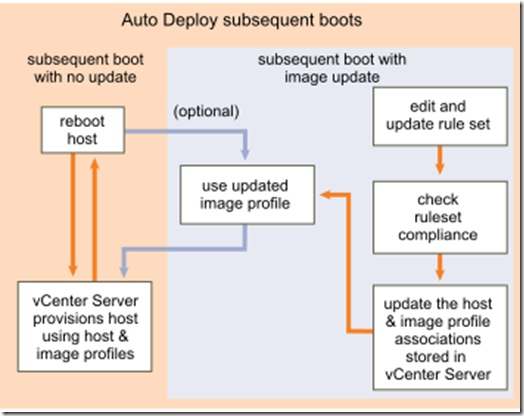 In depth there are more steps to do preparing a vSphere with Auto Deploy environment:

With ESXi Image Builder is possible to: