For the first time ever in a Tech Field Day, Weka.io presented Matrix, an hyper converged filesystem with different rules and an interesting application in on-premises infrastructure and in cloud environments based on AWS. In fact this young software company situated in San Jose (CA) has an interesting scalable parallel filesystem that best fits on AI processes, low-latency environments and all applications which requires speed and protection as well.

A software company… with an interesting technology

One of the important message that came out from the discussion is that Weak.io is selling software: the company’s strategy is to provide a component that could gain their presence in the storage eco-system using hardware commodity.

This is the reason why Weka.io partnership is very consistent in cloud and hardware ecosystems: HPE, DELL, CISCO, AWS, Google,… (check here the full list).

Giving a look at performance/capacity relation, we must consider traditional storage arrays divided in two groups:

But where is and how much cost a huge capable storage that keeps high performances at every scale? The answer stay in the software: Matrix filesystem is built to give a scale-out and clustered system based on hardware commodity, with the same performance of a powerful scale out storage system. 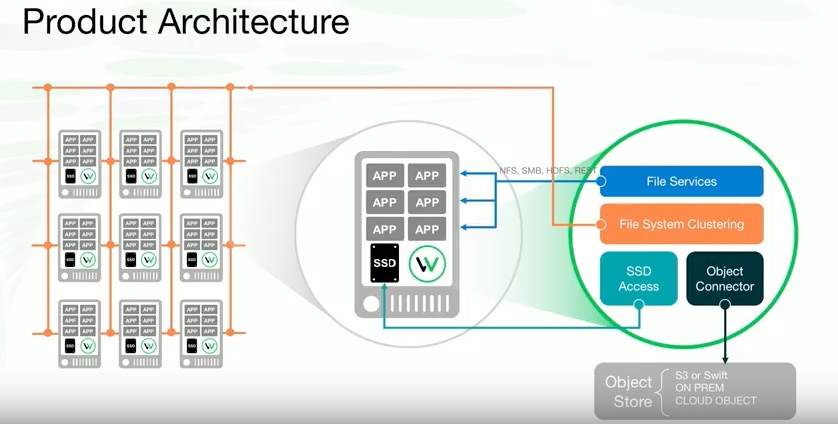 Under the hood of Weka.io, there are some key elements which are contributing to realize a real software defined scale out system, able to handle thousand of computing nodes without compromise the overall performances:

In a linux system, application make sys calls to VFS driver. At user-space the sys call is handled by a front-end component to communicate to S3, NFS, SMB… In the same time the front-end components communicate through the network to backend to handle the protection, metadata and “tiering”. The backend is not a single element, but is composed by small pieces distributed across many servers, and is possible to assign resources (cores, memory and SSD/NVMe devices).

The data locality in HCI

In Hyperconverged solutions, one of the focus of many discussion is about storage and in particular in the mechanisms to provide performance, resiliency and scalability. Data locality is the way for a single host to access to the owned data. In HCI, the mechanism to access in Read and Write a single owned data, is what differentiate the several solution.

Weka.io is believing on the put every IO on the network to ensure protection at every scale… in few words: data locality is irrelevant because modern networks are faster than SSD.

and the demo by Shimon Ben David:

Weka.io Matrix is an interesting project that could fit in many HCI use cases like containers, virtual infrastructure, big-data and AI.

Data distribution, security features (like encryption), tiering provided by different media and snapshots across multiple environments are placing this product as an interesting infrastructure element to distribute “objects” across on-premise environments and AWS, allowing elasticity in delivering workload across hybrid environments.

If you want to get started with weka.io and evaluate feature and performances check the official “get started” page: https://www.weka.io/get-started/.

Disclaimer: I have been invited to Storage Field Day 15 by Gestalt IT who paid for travel, hotel, meals and transportation. I did not receive any compensation for this event and None obligate me to write any content for this blog or other publications. The contents of these blog posts represent my personal opinions about technologies presented during this event.

Cloud-init with Terraform in vSphere environment